The Mornington Peninsula Chorale (MPC) and our director Tom Buchanan had been invited to participate, with other choristers from around the world, in Distinguished Concerts International New York City (DCINY), Carnegie Hall, on January 15th 2017.

When extending the invitation, Dr Jonathan Griffiths, Artistic Director and Principal Conductor DCINY wrote, “The Mornington Peninsula Chorale received this invitation because of the quality and high level of musicianship demonstrated by the singers…”

The Chorale is to spend a total of five days in New York City preparing and then performing Karl Jenkins’ “Requiem” on 15th January 2017. As composer-in-residence at Carnegie Hall, Sir Karl Jenkins will be present throughout our time there, and we will be directed by the conductor Dr Jonathan Griffiths.

For those not familiar with the details of this experience, the following is a brief overview. 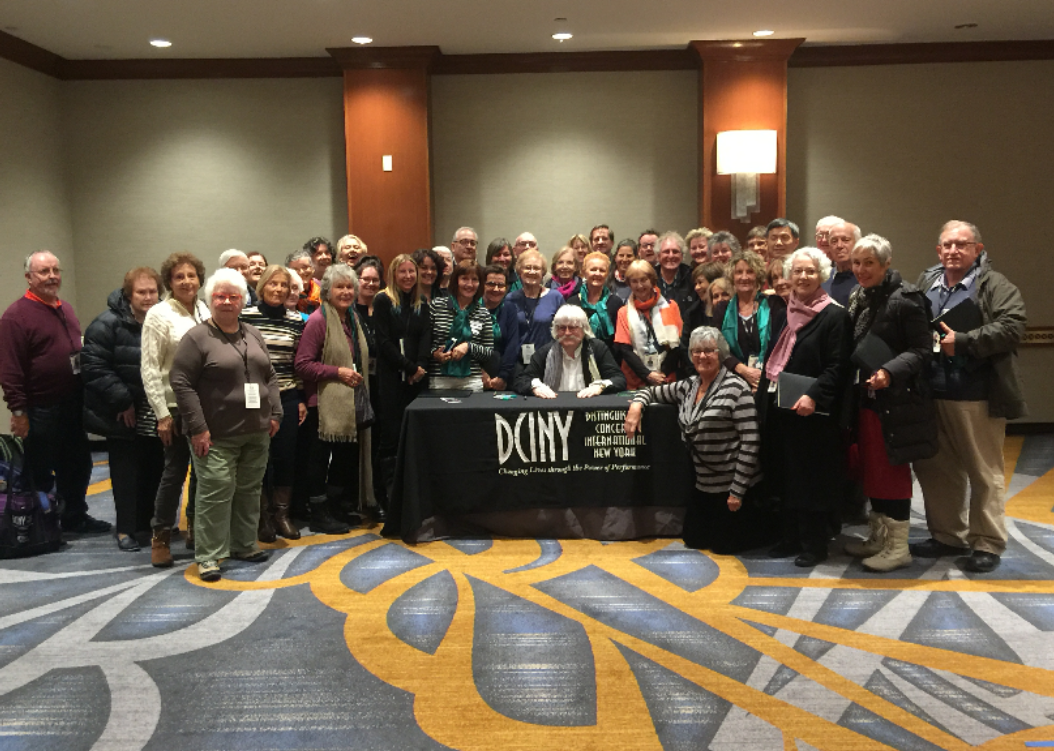 The Peninsula Chorale was invited to participate in a combined choirs performance of Karl Jenkins Requiem, to be sung in Carnegie Hall, New York on Sunday Jan 15 2017. This would be the first in the 2017 series of concerts arranged by Distinguished Choirs International New York ( DCINY),it was a great honour to be invited.

An audition tape was prepared and sent off; the Chorale was accepted, and rehearsals were held on Sunday evenings from mid 2016, for those who were able to take part in this self-funded opportunity. Participants arrived in New York in time for the two compulsory 3 hour rehearsals with Jonathan Griffith, the DCINY Artistic Director and Conductor. These rehearsals, on Friday Jan 13 and Saturday Jan 14 were the first opportunity for all 300 participants from around the world, to come together and sing. There were choir members from Finland, Spain, Germany, Australia, New Zealand and UK, as well as a number from USA.

Karl Jenkins himself was present at each rehearsal, spoke about his work and then was available afterwards for photos and signing of scores. A further extended rehearsal was held on the morning of the performance, when the choir, for the first and only time, sang through with the well-rehearsed and professional orchestra. And then it was performance time!!!

The following are some of the comments made by our MPC members, as they reflected on this wonderful, unique experience.
… Apart from actually performing in New York, the first view of Carnegie Hall from the stage, and meeting the composer, Sir Karl Jenkins, was fabulous.
… I will never forget looking out to the crimson and gold seats in the concert hall, amazed that we were finally there, performing in New York! What a memory, that will last a lifetime – Yippee!!
… The experience of working with Jonathan Griffiths enriched the whole ‘New York project’. We learnt so much in such a brief, intense encounter with this very experienced Musical Director.
… A lasting impression is the immense sense of connection; not only to Carnegie Hall, the conductor and Karl Jenkins, but the heightened connection within our choir. We shared something tremendous. And of course, the whole MPC’s profile is forever enhanced. We made history!
… Looking out from the stage and realising what I was seeing and doing in Carnegie Hall is a ‘forever’ memory.
… It was one of the highlights of my life.
… New York at night. Walking back from rehearsal with snow lightly falling and gently covering the trees and bushes – magical! We stumbled into Trinity Church on Broadway for an amazing candle lit Mass performed by several choirs.
… The warm ups in the Green Room, prior to the performance, were particularly memorable. The impromptu joining together of voices as, country by country, choirs led their favourite warm-up. And then, to finish, a spontaneous round of Happy Birthday, as choir after choir, sang it in their own language. What a wonderful sense of unity among musicians.
… Concert Day. The buzz of gathering in our finery at the Stage Door; then being ushered up, up, up, up to our Green Room. The wonderful Aboa Gospel Choir from Finland singing “We are not alone” as their warm up. Goosebumps, tears, excitement – then lining up and going down, down, down, down and suddenly – we were ON STAGE at Carnegie Hall. Magic memories!

The following was received from Jonathan Griffiths, after the concert.

Dear Singers,
Words cannot adequately express how proud I am of your performance in Sunday’s concert in Stern Auditorium/Perelman Stage at Carnegie Hall.
The review was wonderful and your high performance level came forth with energy, excitement and polish that resulted in an overwhelming positive response from the audience, orchestra members and the critics. Bravi!!