Check out our collection of photos

The Joy to the World Christmas concerts were held on Thursday 7 December, 7.30pm and Sunday 10
December, 2.30pm. Both concerts were held at Peninsula Community Theatre. It was a great concert to cap off a year full of highlights, goodbyes and introductions. The MPC sang with such poise, and emotionand you could hear a pin drop. They sang many Christmas crowd favourites covering twenty one pieces ending with the Hallelujah Chorus.
The Mornington Bach Orchestra performed Burlesque de Don Quixote. We welcomed and introduced Co-Chorale director’s Katrina Waters and Tom Pugh. Katrina was guest soloist soprano who performed the
Holy City, Rusalka’s Song to the Moon and Glory to the Newborn King. We also paid tribute and farewelled Tom Buchanan who stepped down after years of loyal service in directing the choir and building it up to what it is today. Thanks to Michelle Nguyen piano accompanist who does a wonderful job with the choir. Both Christmas concerts bring joy to everyone in attendance with raffles, wine, tea, coffee and shortbreads to enjoy. Congratulations to everyone in the MPC. 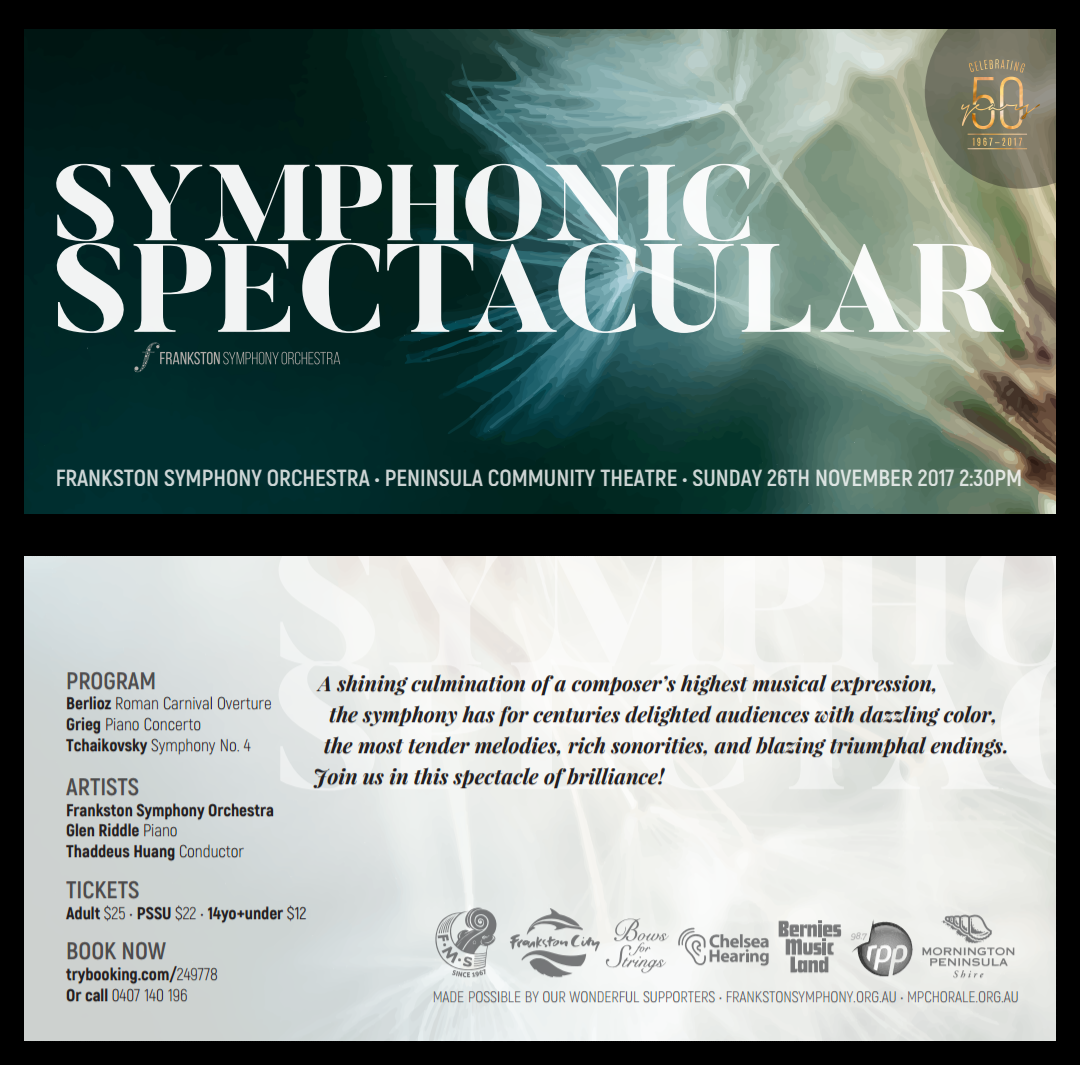 I. Allegro molto moderato – This is one of the most recognisable and exciting of all of the western classical form. The wonderful interplay between the piano and the orchestra that leads us to the powerful cadenza with an insightful and virtuosic performance by Glenn Riddle.

II. Adagio – A lyrical movement that is slow and sweet in contrast to the vigour of the 1st movement. This movement warms your heart with its beautiful melodies and was performed with a flowing gentleness and legato that our audience loved.

III. Allegro moderato molto e marcato – the finale completes this concerto showcasing the beauty of the piano and the mastery of the soloist. An energetic and dashing movement that is full of surprises that concludes with an orchestral and virtuosic performance by Glenn Riddle

To find out more on our guest pianist Glenn Riddle, follow this link to the profile of Glenn Riddle

Thanks to Glenn Riddle for a fabulous performance and the meet and greet session with Glenn Riddle on piano and you did such a superb job.

Symphony No. 4 in F minor Opus 36 – Pyotr Ilyich Tchaikovsky
This was written between 1877 and 1878 and premiered at a Russian Musical Society Concert in Moscow in 1878. The work pushes the boundaries of the symphony in ways that allowed Tchaikovsky to develop an intense emotional quality to his compositions and sets a benchmark for new music in the next century.

I. Andante sostenuto, Moderato con anima, Moderato assai, quasi Andante, Allegro vivo – This movement opens with the horns and brass heralding the orchestra to come to join in the melodies with vitality and power. There are many changes in tempo and dynamics such that the melodies are woven in and out of a loose structure that continually changes and develops throughout this particularly long movement.

II. Andantino in modo di canzona – A beautiful melody is played by the oboe and then unfolds in the cellos that reflects on the melodies developed in the 1st movement and leads the orchestra into this slow and gentle movement.

III. Scherzo Pizzicato ostinato allegro – This movement celebrates the pizzicato form throughout. The winds pick it up with flute and piccalo and then the brass interupt with a marching tune reminiscent of Tchaikovskys Ballet music. This is a fast moving scherzo with dynamic pizzicato swells that concludes on a quiet and gentle note.

IV. Finale Allegro con fuoco – This movement begins with a clash of cymbals and a rollicking tune. Tchaikovsky quotes an old Russian song “In the field stood a birch tree”. The tune is repeated and the orchestra carries on with variations on the old Russian song. A quote from the 1st movement interrupts us and drags us back to the opening of the 1st movement and the orchestra brings us all together in a grand ending.

I’ll keep it short and sweet: three rounds of applause on sunday – you earned every single clap!
In all my time at FSO I have never seen the audience react so enthusiastically, and likewise, I have never seen such a look of achievement and satisfaction on your faces.
It was a joy. Congratulations.

At rehersal our principal Tuba, Harry Williams mentioned there was a record he has where Bernstein is talking about the emotional quality in Tchaikovsky Symphony 4. I found this on Youtube, you can view the video of this in the Youtube Link

In our special 50th Proms Concert on August 27th at the Frankston Arts Centre our special guest performer was Leigh Harrold. 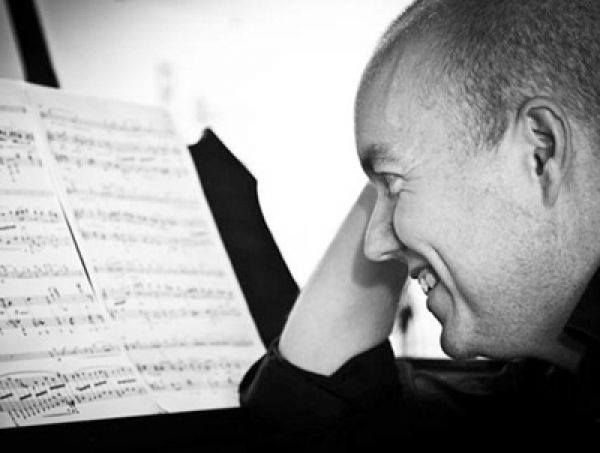 The Committee has prepared a small historical book commemorating our 50 year history.

This was an exciting day of music and celebration for our 50 years of making music together. We almost filled the Frankston Arts Centre and our audience were fantastic in their support for our performances. The repertoire was again challenging and designed to do so for all musicians and choristers. We showcased Gershwin’s Rhapsody in Blue with the extraordinary performance by Leigh Harrold who received a rousing standing ovation. The feedback was so positive from the audience and also from Leigh Harrold who complimented the standard of playing, conducting and our organisation, he thoroughly loved the afternoon. We congratulate Michael Powell for his moving interpretation of Koehne’s Horse Opera. He won many fans that day and we are proud to have him as a member of the FSO. Other pieces were Grainger’s Molly on the Shore, Bernstein’s Overture to Candide, Hadyn’s Heavens are Telling, Walton’s Crown Imperial with the Peninsula Youth Music students and a medley by the Mornington Peninsula Chorale (MPC) of Roger’s and Hammerstein and All I want for Christmas.
Twenty two VIP guests were in attendance representing both the City of Frankston, the Mornington Shire Council, councillors, mayors and deputy mayors, local MP, past committee members, players and
sponsors. We thank Jane Kelley for writing the historical book that so aptly chronicled our history,
Rosemary Bywater and Susan Cooper and their team who set up the wonderful display boards in the FAC
foyer. Thanks to Ashley and Harry for the choir and orchestra riser trailers and set up risers for chorale woodwind and brass. Thanks to Neil, Cathryn, John and Anne for setting up conductors rostrum, chairs and stands. The cake, the balloon drop and complimentary pens capped off a wonderful, proud and uplifting way to end the day.

The Committee presented 50th year mementos to members and hard working friends of the Society.

Trevor Holton for over ten years as leader of FSO.
Amanda Lau for her years as President.
Brendan Elliget for his years as librarian and composer.
Judi McKee for her numerous years as Choir convenor and librarian.
Moira Robinson for her years as Choir conductor and convenor.
Frank Isbister for organising and managing the risers.
Jan Isbister for her work with Minimbah.
Lesley Clapperton for her numerous years on the committee in many roles.

The Committee also organised a special wine offer to celebrate our 50th year.

Rhapsody in Blue – George Gershwin
Pianist Leigh Harrold performed with the FSO Rhapsody in Blue. This was a fantastic performance with a brilliant mix of interludes of piano jazz tunes and tricky but effective brass parts. Here is a Bernstein Youtube Link of Rhapsody in Blue with the New York Philharmonic Orchestra.

Horse Opera – Koehne
This is part of the “Inflight Entertainment Suite”. It has an amplified Oboe which spins a sweet melody and was performed beautifully by our principal Oboeist Michael Powell. Here is a Youtube Link to remind you of the sweet melodies in this Horse Opera.

Candide – Bernstein
A wonderfully complex and intricate piece of music from a Comic Opera.
Here is the Youtube Link where the canon theme of Candide comes from.

Molly on the shore – Grainger

The Heavens are Telling – Haydn

We have received much positive feedback from our audience and VIP guests who were there for our 50th Proms Concert.

Leigh Harrold was such a hit both on stage and off. He received a standing ovation from our audience. Whenever this happens in an Australian crowd it needs to be celebrated. Leigh Harrold posted a huge thankyou to Thaddeus and all the wonderful members of the Frankston Symphony Orchestra and Frankston Music Society for such wonderful playing and hospitality. “I had such a fun time making music with you all – thanks for helping me bring Gershwin’s wonderful score to life. Many congratulations on your 50th anniversary celebrations – what a milestone to be proud of! Very best wishes” – Leigh.

Congratulations Michael on a most exquisite performance on your oboe of Koehne Horse Opera. Many audience loved the piece and you. They were moved and amazed to hear such a wonderful piece of music come to life via your interpretation.

Review from Antionette of PYMS

On behalf of Peninsula Youth Music Society, I would like to congratulate yourself and the Frankston Music Society committee on a wonderful concert to celebrate 50 years of the Society. We can only imagine the amount of work that went on behind the scenes in preparation for the day and on the day. We would like to thank Frankston Music Society for inviting our students to be a part of your 50th Anniversary Proms Concert. What a wonderful opportunity for the students and especially to be involved in celebrating 50 years of Frankston Symphony Orchestra.
Every time PYMS are involved we get wonderful feedback from the parents and students saying how much they enjoy playing with the orchestra and what a great experience it is.
If possible, we would love to get a copy of the photo that was taken of PYMS for our records and to pass onto the students. Once again congratulations to all involved.

Congratulations to you, committee, and all the other helpers enlisted to make our 50th Anniversary such a success. It was a privilege to be a part of it. I cannot believe it is 50 years since Vera had the vision and drive to start the society. Well done to all.

Thank you must go out to the following people for the extra jobs done to make our 50th Proms concert so successful: